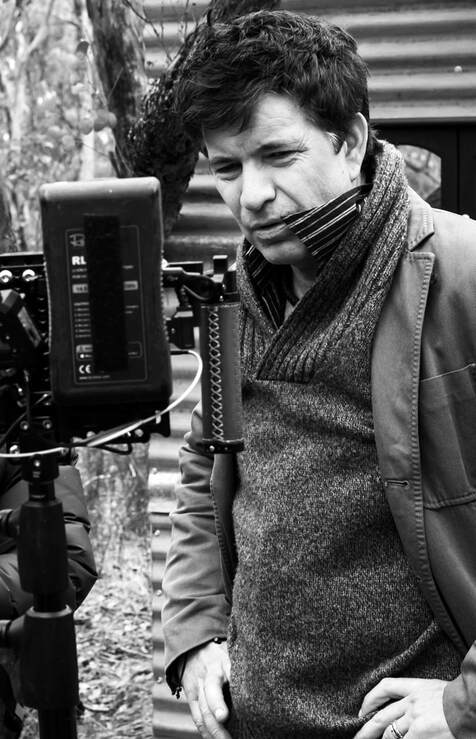 ​An award winning actor on stage film and television for over 25 years with credits in productions such as Neighbours, Blue Heelers, Stingers, City Homicide, Rush, Killing Time, Satisfaction and Underbelly, Alan is also and accomplished painter. He completed his Bachelor of Fine Art in 2006, majoring in painting at the Victorian College of the Arts.

Following Art school, Alan found himself gravitating toward the medium of filmmaking, relishing the opportunity to amalgamate both his performance and fine art skills. This enabled him the ability to craft a distinct and unique voice as an emerging filmmaker.
​
In 2013 Alan formed his production company White Cube Picture Lab with a mission to create intimate avant-garde story telling for the screen. To date he has completed seven short films and has various television and feature projects in development.

Tending to work outside conventional filmmaking frameworks, Alan often performs multiple roles on his projects, including director, cinematographer, sound designer, editor and actor. He even designs the artwork for his film's posters. He is known for striking works that often call upon stark bold visuals coupled with enhanced audio textures and punctuated silences. His narratives often explore what lies beneath the everyday facades and delve deep into the human psyche.

Through his films, Alan has formed partnerships with leading International distribution companies such as Hewes Pictures, Notstream, Flickerfest, Vidiverse and IndieFlix. His films have played on National television (SBS) and have been screened and awarded at some of the worlds most prestigious film festivals. In 2020 his short film works were acquired by the Australian National Film and Sound Archive for their permanent collection.

​Alan has worked as a guest lecturer in film studies at Swinburne Film School and Footscray City Film School and has served as a Jury member for several film festivals, including the 2021 i'l Varco International Film Festival in Rome, where he also currently serves on the board of directors. In 2022 Alan was inducted into the Rome Prisma Film Awards Hall of Fame, for his work on his 2019 short Wild Will.

​Wild Will world premiered in competition at the 2019 Clermont Ferrand International Short Film Festival in the Lab competition and went on to screen in competition at over 70 festivals worldwide including Tampere, Dresden, Encounters, Brisbane, Cannes Antipodes, Festival Tous Courts, St Kilda and Tallinn Black Nights as one of just seven shorts selected worldwide for their new Rebels With A Cause Competition. Awards for Wild Will included The Jury Award for 'Innovation In Form' at the Brisbane International Film Festival, Best Experimental Film at the Castrovillari and Sorsi Corti Film Festivals, Best Screenwriter and Best Lead Actor at the Pollino International Film Festival and Best Short Film at Short Days edition IV in Rome curated under the theme 'The Persistence of Vision'.

Rolling Stone and Washington Post journalist Fillippo Venturi hailed Wild Will as "un piccolo capolavoro" - a small masterpiece and respected French cinema publication Ecran Noir named Wild Will a highlight of the 2019 Clermont Ferrand International Film Festival, before going on to list the film as one their Top-Ten Foreign short films for the year. In early 2022, following it's highly successful festival run Wild Will (along with Alan's 2015 short film The Correspondent) was personally curated by legendary filmmaker Alex Proyas (The Crow, Dark City & I Robot) to be a part of a select collection of short films for the inaugural launch of his VidiVerse online streaming platform.

As a screenwriter Alan has completed numerous short scripts and four feature screenplays to date. Highlights to date include an 2017 Academy Nicholl Quarter Finalist placement for his feature script The Milk Bar and an 2018 Australian Writers Guild Monte Miller nomination and Blue Cat Screenplay Competition Semi-Finalist placement for his screenplay Leo's Dream. In 2018 Alan was inducted into the prestigious Australian Writers Guild Pathway's program, a platform designed to showcase the very best in Australian screenwriting talent.

In 2023, with assistance from Creative Victoria, Alan completed his first feature film, Beast a dark experimental comedy,
shot over seven gruelling days & nights with a small, yet highly dedicated team in regional and metro Victoria.

Beast is due for its world premiere screening and subsequent release in 2023.